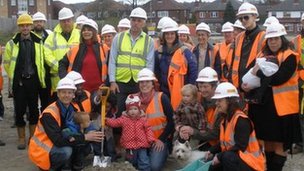 It began as a conversation between friends with the same ideals.

They wanted to be neighbours, to form a community, to raise their children together and live in eco-friendly, warm, affordable homes.

Now, more than five years on, they are weeks away from being given the keys to their dream.

“It’s been such a story of perseverance and dedication, really. It’s been an amazing journey. This last bit’s the hardest because it’s just counting the days now until we move in,” said Paul Chatterton, one of the soon-to-be residents of LILAC.

LILAC, or Low Impact Living Affordable Community, is a development of 20 straw bale homes on the site of a former school in Bramley, Leeds, and is said to be the UK’s first affordable, green co-housing project.

Dr Chatterton and his partner Tash Gordon are among the founding members of the scheme.

Designed By HowlThemes
Back To Top